The history of hmmana (pronounced Hum-mah-nah) is apparently when Monica from "Friends," the American sit-com, was describing to Ross in one scene just how handsome someone was. We've used the expression ever since.

This collection of photos have been taken by me and my team of avid supporters - they're of handsome men during their everyday lives and for no reason at all, most seem to feature bums a lot!

There are now so many that I have had to catalogue and separate them so the pages will load a little quicker. As the collection started with naming them, I've used their titles to put them into alphabetical order. 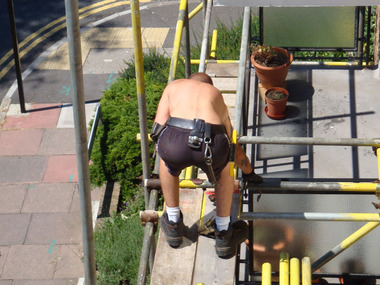 WAYNE'S FAVOURITE HMMANA OF ALL TIME

And the award for best pose by subject, best shot by photographer goes to David W in Kemptown, Brighton for the scaffolder wearing only shorts  with no underwear or t-shirt.