Top
Back to Photos

This page displays all of my tattoos, when and where they were done. The cost and why I chose to have them make up their descriptions. 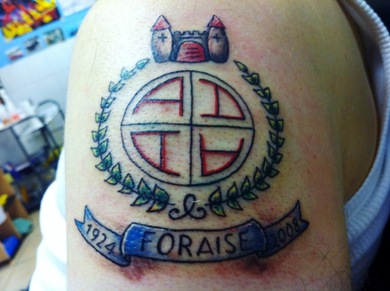 19 October 2001 - This was a drawing created by Dad back in 1981. It was an illustration to symbolize the four A's, Dad, Michele, Nik and Wayne. The original text which has always had FORAISE in the middle, and deliberately spelt FOR instead FOUR, had certo and ceto written either side. Still unclear of exactly what those words are, Wayne decided when it was converted to a tattoo, and as Dad had passed away 3 years earlier, that Dad's birth and death years were more appropriate. Dad was born 12 November 1924 and died on 12 April 2008. The tattoo is the first one ever and is situated at the top of the left arm, by the left shoulder. It cost £80 and was done at Tribaland in Rose Hill, Carshalton and the tattooist was Lisa.

8 May 2012 - This second tattoo that was placed on the top of my right arm, by my right shoulder, is of a design that I've been using as my own logo. I've used it at the top of letterheads and as a footer in emails. The tattoo was done at Tribaland and again the tattooist was Lisa and it cost £60. 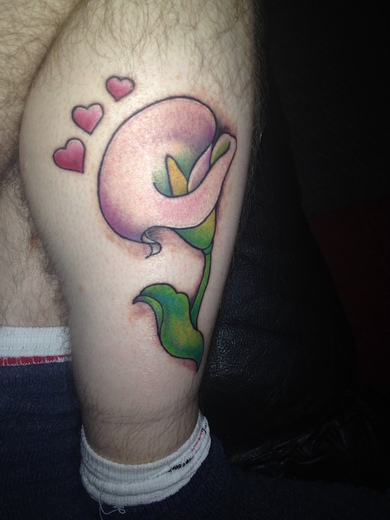 25 October 2013 - The Calla Lily is a favourite flower of both Jezz and myself. It is a copied image from the internet but with three added red hearts. It is positioned on the outside and lower half of the right leg. It was done by Lisa at Tribaland, Rose Hill, Carshalton and it cost £80. 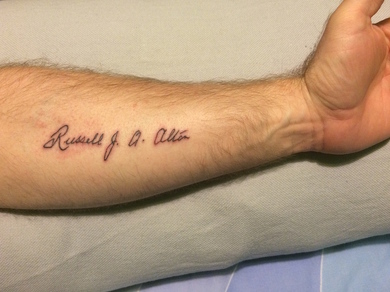 24 November 2014 - A completely impulsive moment, I sat bored at home and decided that I would get a tattoo. The idea of Dad's signature came to me and I set out to have it done. For some reason, I decided to try a different tattooist and I went to Caroline's in Waddon. The tattoo is positioned on the inside of the lower left arm and cost £25. 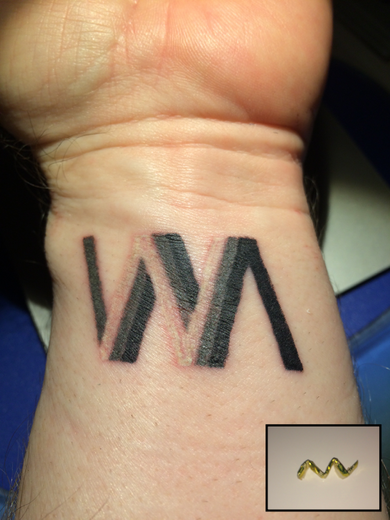 27 October 2015 - One Christmas in the early 1980's, Dad was playing with the sweetie wrapper of a 'toffee penny' from the Quality Street tin, while watching telly. He had folded it several times to give it some thickness and then made four more folds. He called me over to look at it and explained that depending on how it was held, it spelled the letter W for Wayne, the letter N for Nikola and an M for Michele. I still have the original wrapper in the collection of memorabilia of life (see insert). But 30 years later it gave me the idea to design the same effect and make it a tattoo and this is the result. It's positioned on the inside of the left wrist, was done by Lisa at Studio 149, Lower Morden and cost £40. 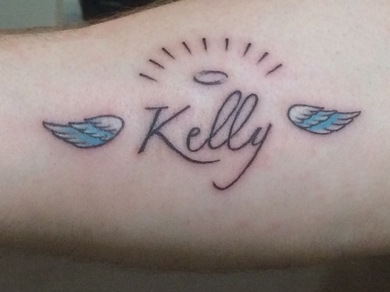 23 March 2016 - My beautiful daughter's name, Kelly, written in a calligraphy style font, with a shining halo above and wings either side shaded with blue and white. It was designed by me and is positioned on the inside of the lower right arm. It was done by Lisa at Studio 149, Lower Morden and cost £50. Kelly wrote on her Facebook page: My daddy's new tattoo. What a lovely, gorgeous token of devotedness. I love it. I hope that I can always be as perfect as you believe I am. 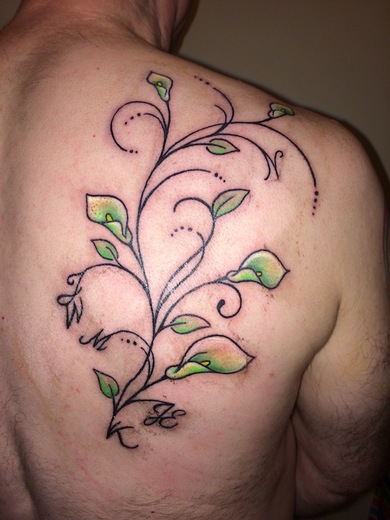 20 April 2016 - This tattoo is probably the one that I've pondered on the longest. It's been about two and a half years in the making. The idea was to use members of my family's initials on a winding vine that has some dotted artwork and Calla lilies on it. It is a design by Jezz, modified several times because of my wanting to change red love heart-shaped strawberries to white Calla Lilies. The initials represent my family, N for Nikki, M for Michele, K for Kelly, E&J for Ethan and Jake and JW for Jezz and me. Once again, it was done by Lisa at Studio 149. It is placed on the back, from the right shoulder and cost £90. 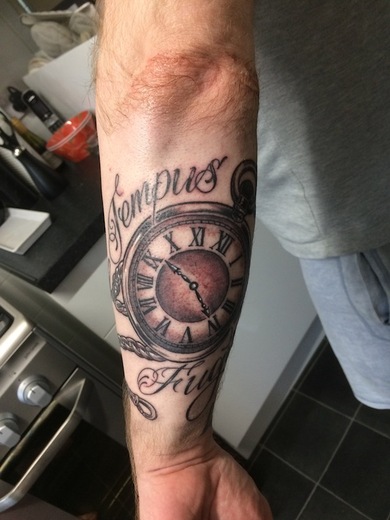 13 June 2017 - This tattoo is of a pocket watch, copied from an idea I'd seen by googling 'pocket watch.' It includes the words 'Tempus Fugit' which stands for time flies. But more importantly, it was an expression that Dad used all of the time. Also, the time is 9.20pm which was the time Dad passed away on 12 April 2008. The tattoo was done by the brilliant Jay who owns The Tattoo Emporium, Surbiton, Surrey. The tattoo is on the outside of the lower left arm. It cost £150. 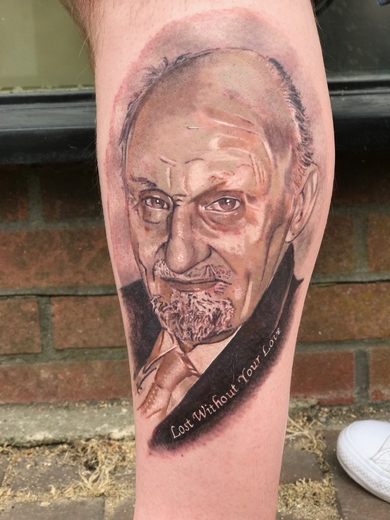 9. Portrait Of My Dad

23 June 2018 and 17 July 2018 - The Mother of all tattoos to date. I've often wished for a portrait tattoo of Dad but was always too scared in case it ended up looking nothing like him. I'd ask tattooists and they'd say they don't do portraits but know someone who does. Well, I finally found Ben Hamill, a very accomplished tattooist currently working in Farnborough, Surrey. It's placed on the outside lower left leg, took a total of almost 8 hours over two sittings and is the most expensive tattoo so far, £500. 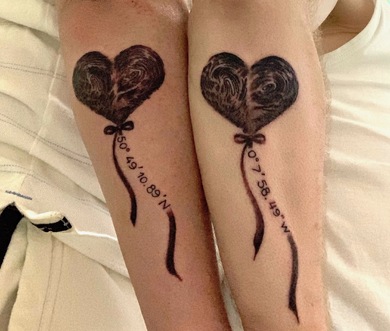 9 September 2019 - This tattoo was on both of our right forearms, Jezz and I. The heart-shape contains each of our wedding finger fingerprints, tied with a ribbon and from one strand the two different co-ordinates that when entered into maps software, like Google Maps, gives the address of where we met in Brighton, 2000.