Wedding of Jezz and Wayne Alton

On Saturday 6 November 2021, I married my soulmate. Jezz. It was at The Hilton Brighton Metropole in Brighton, East Sussex. We were accompanied by 60 guests. 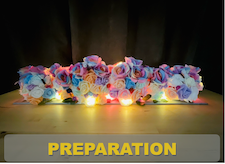 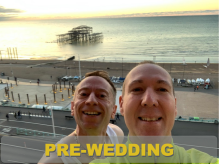 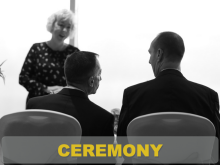 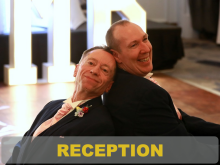 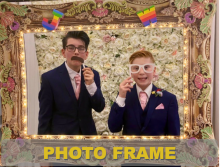 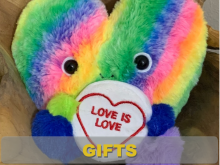 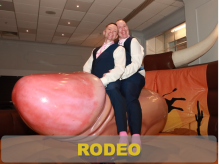 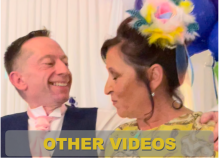 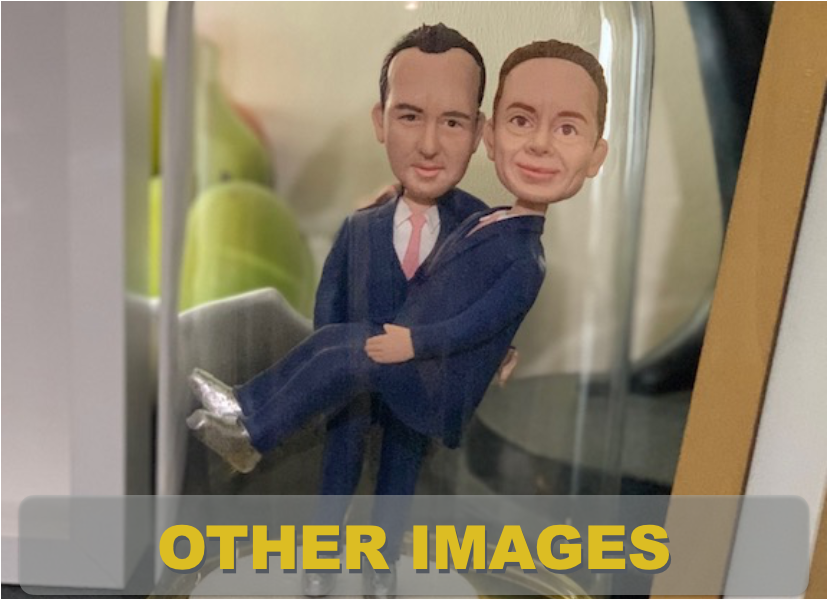 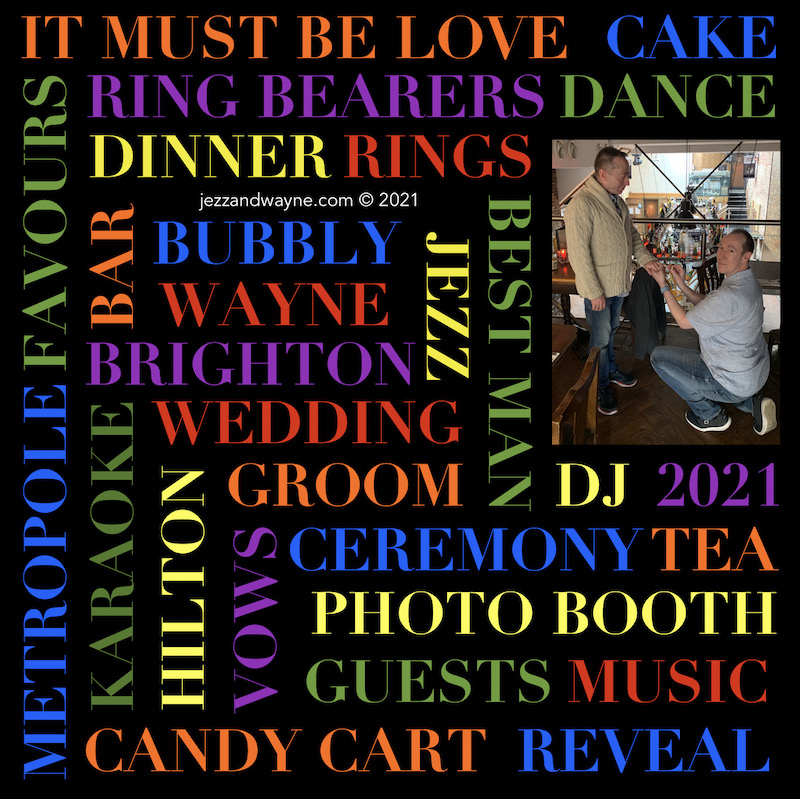 This put-together effort of a photo slideshow was created by me in Keynote. I then bought a cheap projector and ran it on a loop in the background against a screen, in the corner of the reception room.

The wedding of Jezz and Wayne took place at the Hilton Brighton Metropole on Saturday 6th November 2021 at 3.30pm.

The ceremony started at 4pm and was in the Chartwell Suite which has a floor-to-ceiling panoramic sea-view. There were two official registrars present from Brighton & Hove Registry Office. They were Betsy and Rachel. Also, the two witnesses were Andy and Nikki. Jezz and Wayne's grandsons were acting as security and then ring bearers, Jezz's best man, Andy, Nikki, Wayne's sister passed the ring pillows to Ethan and Jake. 30 seated guests shared the experience. Simon, our photographer captured the moments of the entire service.

Then, a gathering of chat and meets, downstairs in the reception area, more professional photos were taken by Simon, including posed shots on the staircases downstairs. Everyone then made their way to the Ambassador Room for a sit-down meal that was fish and chips (with a grilled fish or fried chicken or vegetable fritters option) served with rose lemonade. That was followed by a speech and toast from Andy, and then Wayne's 21-minute epic debut stand-up comedy set. Bubbly was served during this time. Favours bags were placed in front of each table place setting and all guests had one each. They included homemade keyfobs, a fridge magnet, a personalised pen, a mini-message in a bottle, bubbles, Skittles mini jar (rainbow jar), a wedding rock sweet, a mini rock, lollipop, a glowstick item and a 'Wedshoots' card. The card explained to each guest how to download, install and use the Wedshoots app. This enabled more than 800 photos and videos to be shared with everyone linked in with a unique link for the app.

A staffed bar was in the room, along with a self-serve tea and coffee station. DJ Wayne, provided karaoke and music for the evening. The music consisted of 70s soul-funk and disco music initially and then some modern-day chart stuff as well.

The room was decorated with a heavy rainbow theme and plenty of fun was had with the photo frame and photo-taking props. Decorations included 4ft Mr & Mr signs with a 50 as well, a flower wall and table centrepieces involving rainbow-coloured ostrich feathers in tall vases, thanks to Ali, Claire and Spencer.

The room featured a large rainbow arch of balloons and giant J and W balloons on balloon plinths, gifted by Andy and David.

A rodeo penis was hired and held back in the adjoining room, the Sandringham Room,  until later in the evening as the secret reveal.

Around 10pm, quick, simple and hot savoury food was served with staff providing hot dogs, burgers and cones of fries.

In July 2021, Jezz and I set to work on designing the invitation cards. The daytime guests were to receive an interactive card. Initially, we messed around with folded plain paper and string but eventually, we came up with the idea of when the card is opened a piece of rainbow coloured silk pulls tight to 'tie the knot.' The result can be seen from this video:

The evening guests all received a single A5 invitation card with the relevant details: 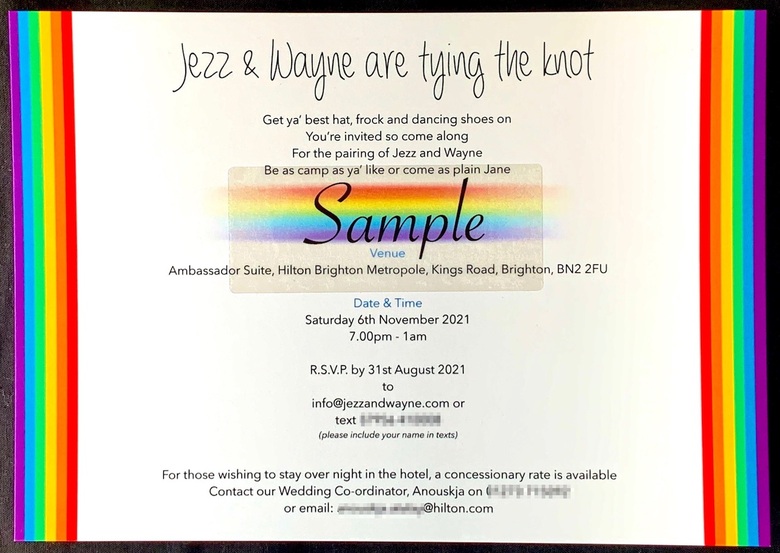 THE THANK YOU CARD

We sent out thank you cads to everyone who came to the wedding ceremony and reception. This was the artwork featuring one of the best photos of Jezz and me, seated on the dancefloor, back to back in front of the Mr & Mr sign. The back cover thanks everyone who contributed to the making of the wedding and the inside had a measured piece of laid paper with a personal printed letter to each person who received the card. 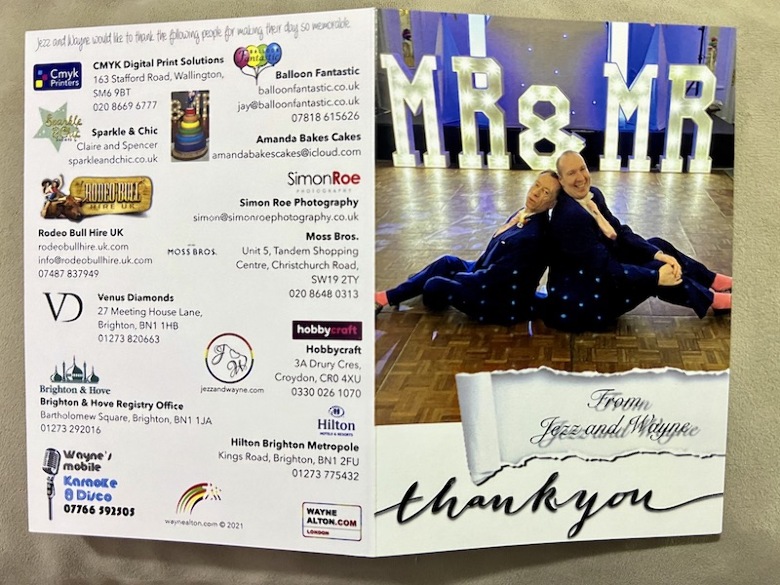 The suits were hired from Moss Bros, originally at the Hove branch but we've had dealings with Kingston and Colliers Wood branches too. The suits are actually blue in colour (though they do look black in this photo), they're Ted Baker and three-piece tails. 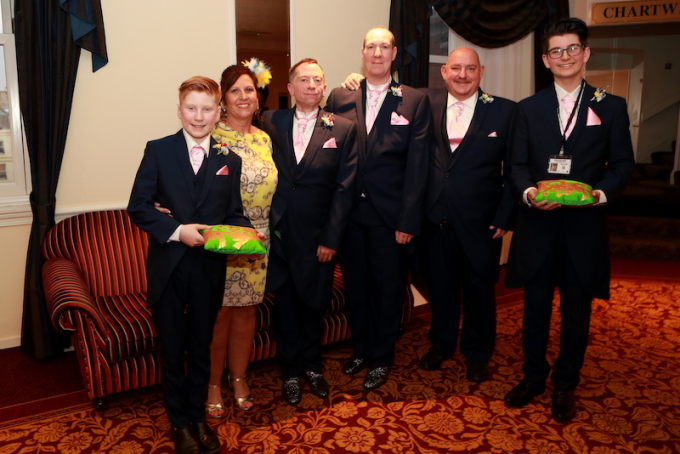 Originally the rings were an impulsive buy for the pair of us, but with the idea of a marriage on the horizon, they were re-named 'engagement rings.' They were bought from Venus Diamond, one of the many jewellery stores in The Lanes, Brighton. It's managed by Arkham and we served by both him and Jo on 19 May 2019.

As we prepared for the wedding, it made sense to have the rings engraved. So, I designed what needed to be added and they were hand-engraved in plenty of time for the day. And here they are... the first image is my submission for the engraving and the next image is how they looked when we got them back. 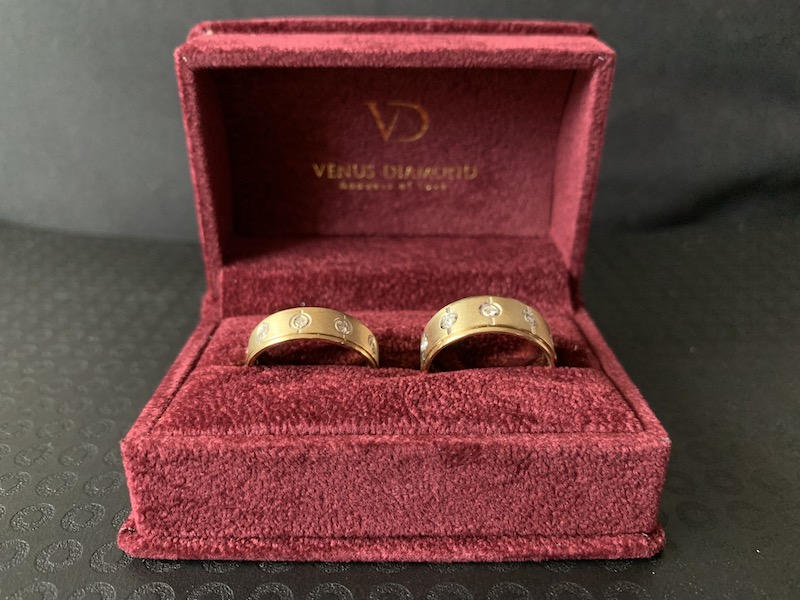 Jezz bought me gifts that featured: something old, something new, something borrowed, something blue. The new were these gorgeous cufflinks. Each one unscrews and reveals a personal message. Click/tap on image to see messages.

Jezz and I spent a long time making stuff. Not so much to save money because I'm not sure we did... lol. But amongst our developing HobbyCraft skills, we made these buttonholes for those who identify as male. Click/tap on image to see an larger version.

And after creating the buttonhole, we had to have something for those who identify as female. Click/tap on image to see an larger version.

ASOS DESIGN loafers in black glitter with snaffle detail. These were Jezz's idea, from ASOS, glitter shoes. Well, of course! Click/tap on image to see an larger version.

... AND THE TRAINERS TO MATCH

Half way into the evening, Jezz and I changed out of our suits and into grey Diesel jeans, a Gant pink and rainbow t-shirt and these, glitter trainers. Jezz bought his first and we couldn't get hold of a pair in my size but I stumbled on these on eBay... they're Vans and were about £40. Fab. 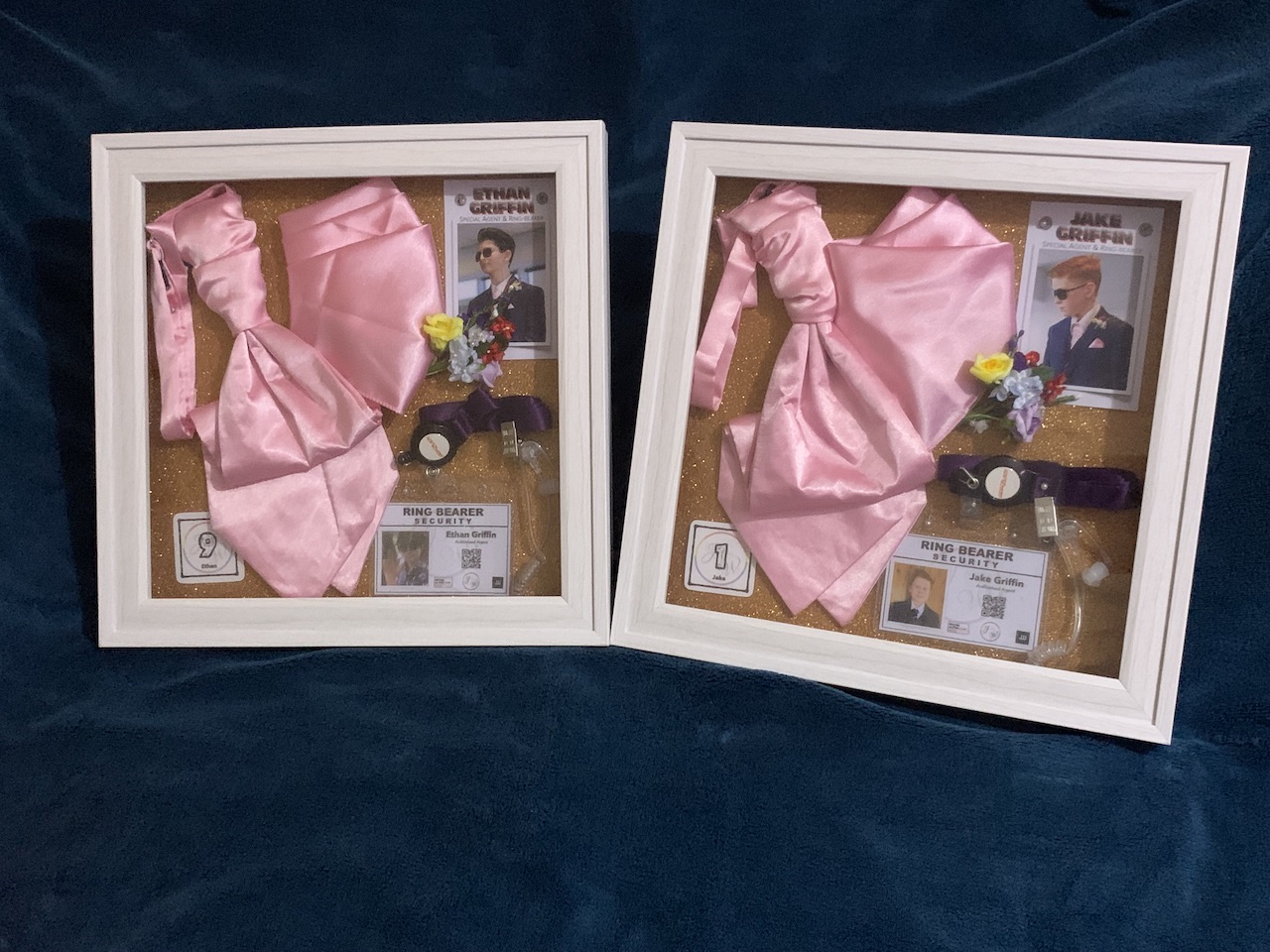 I created these memory frames for my gorgeous grandsomes, Ethan and Jake. They were our ring bearers and security for the ceremony. The regalia includes the cravat, buttonhole and security lanyard and ID card that they both wore on the day. 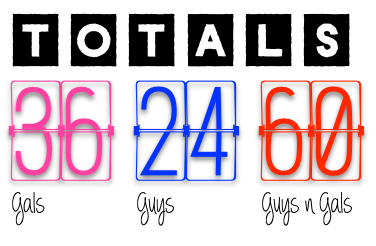 THANKS TO THOSE WHO ATTENDED

Amanda, Mother and Sara, Jezz and Wayne, Nikki and Caiger, Michele and Dean, Debbie and Jim, Kelly and Chris, Ethan and Jake, Zoe and Neil, Stacey and Spencer, Andy and David, Wendy and Helen, Vicki, Ali and Simon, Simon, Harrison, Tim and Miranda, Sarah and Karen.

THANKS TO THOSE WHO CAME FOR THE EVENING

What was the best bit?

As guests talk to both Jezz and I about the day, we made a point of asking them what they remembered most or thought was the highlight of the day. Here are some of the responses.

Jake, singling me out for the security inspection.

Ethan's face when he saw his Granny's inhibitions.

The welcome and acceptance from Kelly, Zoe and Stacey.

The reading of both vows.

Wayne's speech and the grooms' suits.

The reading of both vows.

Nikki fell off the rodeo before she got on and Jezz's face during the 'Happy Birthday' mob dance.

Jezz and Wayne, at the sweetheart's table, looking romantic.